I am really enjoying Stargate SG 1! My favorite character is Samantha Carter. No surprise there - she is so kick ass. And I ship her with O'Neill. Anyone else a Stargate fan?

They steal a lot from Trek, but it is a still a pretty good series.

You guys have GOT to see the Jackie Robinson movie, 42. It is the best sports movie I've seen in YEARS! So inspirational :)

Louisville Cardinals win it over Michigan last night by points! I am so proud of them! They won for Ware (#5). I stayed out really late last night to celebrate but it was worth it :) 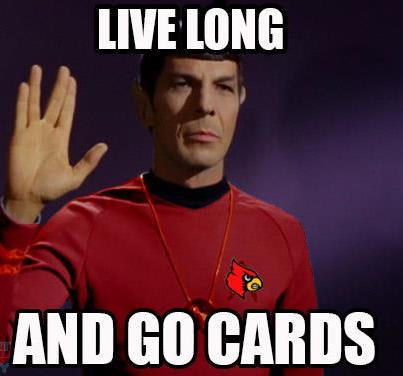 This article is worth checking out. It contrasts Star Trek and Star Wars, and there is some discussion of Benedict's character as well. Enjoy! Trek movie has a lot going on.

Does anyone have a guess on when we can start buying midnight movie tickets? Is it a month before? 3 weeks? I can't remember!

I love this K/S vid so much! Bluefairy1113 is a genius. I hope she/he does more vids when Star Trek Into Darkenss comes out.

Title: All The Single Vulcans
Author: SpirkTrekker42
Rating: PG
Genre: Romance, Humor, Parody
Series: Songs In The Key Of Trek
Universe: ST:XI but you could make it work for TOS too
Summary: Spock gets drunk on chocolate and sings this song for his boyfriend, Kirk.
( Collapse )

If anyone knows how to get clips, please let me know. I'd rather use movie/tv show clips. I have bit torrent downloaded but it doesn't do shit.

Hey, philes! David Duchovny's movie "Phantom" is out this weekend. This is the first movie he has done since the lame XF movie in 2008. The plot is interesting and DD does a really great job acting as this Russian government agent playing opposite submarine captain Ed Harris. Please come out and support DD at the movies! It really is worth paying for. Thanks.

P.S. The best part is that you get to see DD in a black tank top and let me just say that he is really in shape! *fans self*

They did have it in color as well. Yes, in 1902. Someone painted all the still frames very carefully.

From the Earth To The Moon - This is also in Scorcese's Hugo as well. Thanks, Georges Melies!

Happy Birthday - The Birthday Massacre
This is one of my favorite bands of all time! I'm more fond of the tune than the lyrics but boy I think it's catchy!